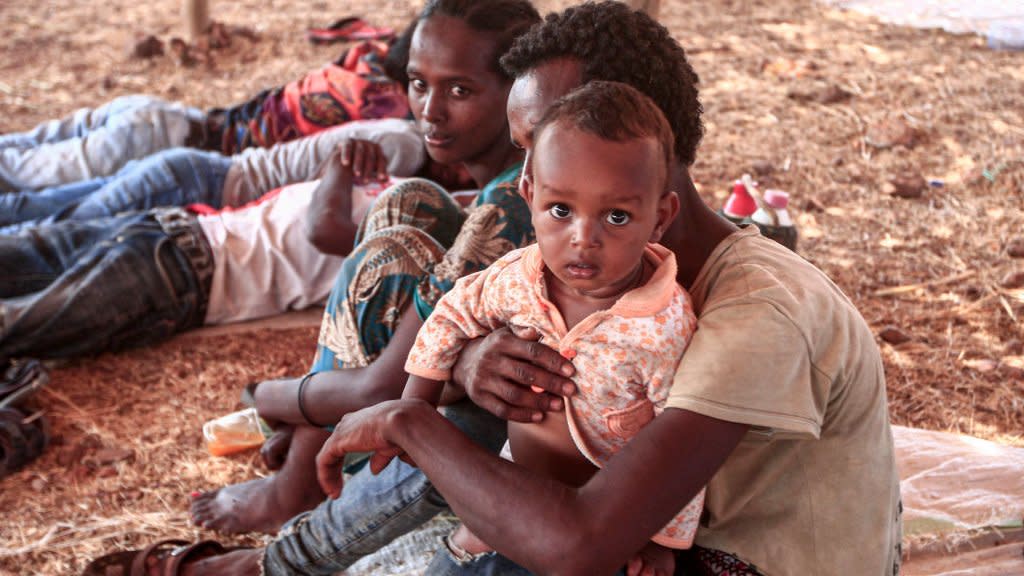 Ethiopia’s forces have captured two towns in the northern region of Tigray where soldiers loyal to the local political party are fighting the central government.

Tigray’s leader confirmed the losses but said it was a temporary setback and vowed to defeat the government.

Ethiopia’s prime minister has said that his army is advancing on the Tigrayan capital Mekelle.

Hundreds of people have reportedly died in two weeks of clashes.

Verifying information from Tigray is hard due to a blackout on most communications.

When Ethiopian Prime Minister Abiy Ahmed postponed a national election due to coronavirus in June, tension escalated between the two groups. The TPLF sees the central government as illegitimate, arguing Mr Abiy no longer has a mandate to lead the country.

The government accused the TPLF of attacking a military base to steal weapons, which the TPLF denied. In response, Mr Abiy ordered a military offensive, accusing the TPLF of treason.

Government forces seized the towns of Shire and Axum after a three-day deadline given by Prime Minister Abiy to Tigray’s forces to surrender expired on Tuesday.

TPLF leader Debretsion Gebremichael confirmed to a local TV station on Wednesday that his soldiers had lost control of the towns in the south and west of Tigray, but said it was temporary and vowed to defeat Mr Abiy’s forces.

“Let us mobilise our entire capacity,” he said, calling for all Tigrayans including children to join the “struggle”.

“Tigray is now a hell to its enemies. The people of Tigray will never kneel,” the TPLF said in a statement, according to Reuters news agency.

Ethiopian officials accused the TLPF of destroying four bridges close to the Tigray capital Mekelle, but the group denied the claims.

The prime minister suggested on Tuesday that the fighting was coming to an end, saying “the final critical act of law enforcement will be done in the coming days”.

At least 27,000 people have fled over the northern border to Sudan as the UN warned a “full-scale humanitarian crisis” was unfolding.

TPLF adviser Fesseha Tessema, a former Ethiopian diplomat, told the BBC that civilian sites in Mekelle were being bombed by federal forces.

“[The people of Tigray] haven’t done anything wrong, they are in their own homes, churches,” Mr Fesseha said.

The federal government has denied targeting civilians and said that air attacks are aimed at the Tigrayan military.

By a BBC reporter in Mekelle

A deadly air strike just before noon on Tuesday killed two people and injured others in Mekelle, doctors said. It is not yet clear who carried it out.

I was out on the streets shortly afterwards and saw an ambulance carrying people to hospital. Witnesses told me a young boy – one of the wounded – died on arrival, and three others are still receiving treatment.

Because the banks had reopened, people in the city were out shopping at the time the incident took place. There have been other strikes in the city which did not cause casualties but caused a lot of damage to buildings.

I went out to assess the situation and found houses with collapsed walls and roofs, and bridges destroyed. Artillery has created craters on key roads. Local people have been milling around in the affected areas, discussing the attacks and the damage.

How bad is the humanitarian crisis?

The UN’s refugee agency, the UNHCR, has said that thousands of people have been fleeing the fighting.

The agency was “on stand-by to provide assistance in Tigray when access and security allow” spokesman Babar Baloch said.

“There may be massive displacement inside Tigray and that is of course a concern and we try to prepare the best way possible,” Jens Laerke, spokesman of the UN Office for the Coordination of Humanitarian Affairs (OCHA), said.

The UN fears the numbers fleeing Ethiopia may be just a fraction of those forced from their homes by the fighting, but for the moment aid agencies have no access to the Tigray region.

Regional powers Kenya and Uganda have called for negotiations to find a peaceful resolution to the conflict.

The Ethiopian government has, however, ruled out talks with the TPLF.

How bad is the violence?

Human rights group Amnesty International said it had confirmed that “scores, and likely hundreds, of people were stabbed or hacked to death” in the town of Mai-Kadra (May Cadera) on Monday last week.

Mr Abiy has accused forces loyal to Tigray’s leaders of carrying out the mass killings. The TPLF has denied involvement, saying it will welcome an independent international investigation.

Ethiopia’s human rights commission said it would send a team to investigate.

Why are the government and TPLF fighting?

The TPLF dominated Ethiopia’s military and political life for decades before Mr Abiy took office in 2018 and pushed through major reforms.

Last year, Mr Abiy dissolved the ruling coalition, made up of several ethnically based regional parties, and merged them into a single, national party, which the TPLF refused to join.

The feud escalated in September, when Tigray held a regional election, defying a nationwide ban on all polls imposed because of the coronavirus pandemic. Mr Abiy responded by calling the vote illegal.

It also resents what it calls the prime minister’s “unprincipled” friendship with Eritrean President Isaias Afwerki.

Mr Abiy won the Nobel Peace Prize in 2019 for his efforts to bring peace with Eritrea.

The prime minister believes TPLF officials are undermining his authority.

The case for shopping on Black Friday in 2020

The Home Cook Gift Guide: All the Kitchen Tools and Accessories to Make Them Feel Like a Chef

The Home Cook Gift Guide: All the Kitchen Tools and Accessories to Make Them Feel Like a Chef